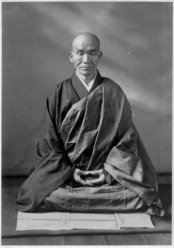 Master Kodo Sawaki was born in Tsu-city in Mie Prefecture in the west of Japan in 1880. His parents were both dead by the time he was eight years old, and he was brought up by cruel and criminal parents at the back of a brothel. He witnessed the dark side of humanity; depravation and even murder whilst he was a child. At the age of 17 he travelled to Eiheiji Temple, taking with him no money, and having only two small packets of rice with him. Over four days and night he walked there, having no money and eating only uncooked rice. Life at Eiheiji was not what he expected, not in a state of enlightenment.. He found that many trainee priests there were just interested in eating a lot and drinking lots of sake. He left Eiheiji Temple and went to Soushinji Temple, Kumamoto in Kyushu at the age of 18, where he met Master Koho who later gave him the precepts. He was called up to the armed forces during the war between Japan and Russia at the age of twenty-five and was wounded in battle. After the war he travelled throughout the whole of Japan giving talks on Buddhism and teaching them how to practise Zazen. He continued until his death in 1965 at the age of 85.

(There is a more in-depth article available by Yoko Ueda on the Articles page. )